Are We Finished Yet?

When dealing with construction projects, the answer to this seemingly simple question is not actually that simple. Are you asking if the works are complete, or if all contractual obligations have been discharged? This article will explore the, sometimes woolly, concept of completion in relation to construction projects including practical completion, sectional completion, partial possession and even early access.

Under the terms of most construction contracts, completion means the date when the works described under the contract have been completed. Unfortunately, there is no definitive legal definition of completion. It is therefore a matter for the Architect or Contract Administrator to decide if the works are complete based on their professional opinion. In most cases, completion is deemed to mean that there are no outstanding defects, except for minor ‘snagging’ items, and the client can have a beneficial occupation and use of the site.

Projects aren’t always that simple though. Often the client will want to have sections of the works complete at different times to make use of, or sell off, those sections in advance of Practical Completion of the whole project. There are two mechanisms used to achieve this, Sectional Completion and Partial Possession.

Most Standard Form Construction Contracts allow for the concept of Sectional Completion, which involves the splitting of the works into different sections with separate:

Early Use by Employer

Finally, the JCT Suite of Contracts also allows for early use by the Employer “for storage or otherwise”. Like Partial Possession, the Contractor must give their consent for early use and it cannot be unreasonably withheld. Unlike Partial Possession, early use does not trigger Practical Completion of any section of the works so there is no release of retention and the risk of loss or damage still lies with the Contractor. Early use is sometimes difficult to distinguish from Partial Possession and for this reason, it can easily lead to problems. If the Client causes any delay or disruption through early use, then the Contractor can bring claims for extensions of time and loss and/or expense.

When asking “Are we finished yet?” there are a lot of things to consider. 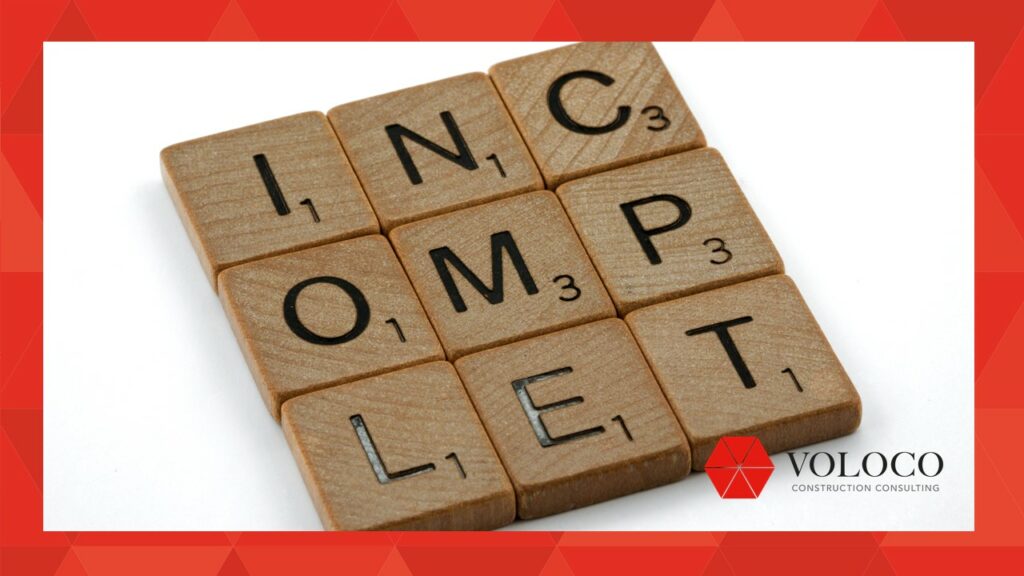 Tender Reviews and Risk Management
Dedicating the requirement amount of effort and investing in reviewing tenders before committing to submit is a proven strategy to identify, manage and reduce risk, potentially saving you wasted time and effort in the tendering process and even more significantly from entering into a deal that may be a bad one for you.
Read more

Package Procurement the Right Way
Procuring the work packages can make or break a construction project. Following the steps set out in this article will help reduce the risks associated with work package procurement, give you more control and ultimately improve your business performance.
Read more

Ensure You Insure
Insurance in building is not only prudent, but is also most likely a contract requirement and may be a legal requirement. Some deem it a “necessary evil” and others strongly believe in the protection of their business which it provides. Regardless, any builder without appropriate insurance risks the success of their business and potentially their personal assets.
Read more

This website uses cookies to improve your experience while you navigate through the website. Out of these, the cookies that are categorized as necessary are stored on your browser as they are essential for the working of basic functionalities of the website. We also use third-party cookies that help us analyze and understand how you use this website. These cookies will be stored in your browser only with your consent. You also have the option to opt-out of these cookies. But opting out of some of these cookies may affect your browsing experience.
Necessary Always Enabled
Necessary cookies are absolutely essential for the website to function properly. These cookies ensure basic functionalities and security features of the website, anonymously.
Functional
Functional cookies help to perform certain functionalities like sharing the content of the website on social media platforms, collect feedbacks, and other third-party features.
Performance
Performance cookies are used to understand and analyze the key performance indexes of the website which helps in delivering a better user experience for the visitors.
Analytics
Analytical cookies are used to understand how visitors interact with the website. These cookies help provide information on metrics the number of visitors, bounce rate, traffic source, etc.
Advertisement
Advertisement cookies are used to provide visitors with relevant ads and marketing campaigns. These cookies track visitors across websites and collect information to provide customized ads.
Others
Other uncategorized cookies are those that are being analyzed and have not been classified into a category as yet.
SAVE & ACCEPT

To hear more from the team at VOLOCO, fill out the form below. By filling out the below for you are happy to receive occasional emails from the team.